Raise your hand if you’ve played carrom in your childhood with your friends and family. The game holds a special memory in people’s hearts, especially throughout India and parts of Southeast Asia.

You must also have wonderful and unique childhood memories surrounding the game.

Carrom is a board game, which originated in India and is played with the help of a striker and carrom men. The game is also played professionally in the country, and the sheer passion drives carrom.

You need two to four people to play the game, and the primary purpose is to pocket all the color game pieces, along with the red game piece (also called the queen).

To win, you need to pocket all the pieces before the opponent. The use of the striker adds the much-needed thrill to the game, and you need to strike your game pieces to pocket them.

Given the massive popularity of carrom, people are not willing to let go of the game. However, lugging around a heavy carrom board is quite inconvenient. That’s where online carrom board games come to the rescue.

You can download the online carrom board app and experience the same excitement without carrying the giant board around.

Also, you don’t need to wait for your friends to play a round of carrom with you. It is easy to connect with online players on the carrom app.

The online carrom board games appeal to everyone because they’re quick to learn, and from novices to experienced players can compete against each other. 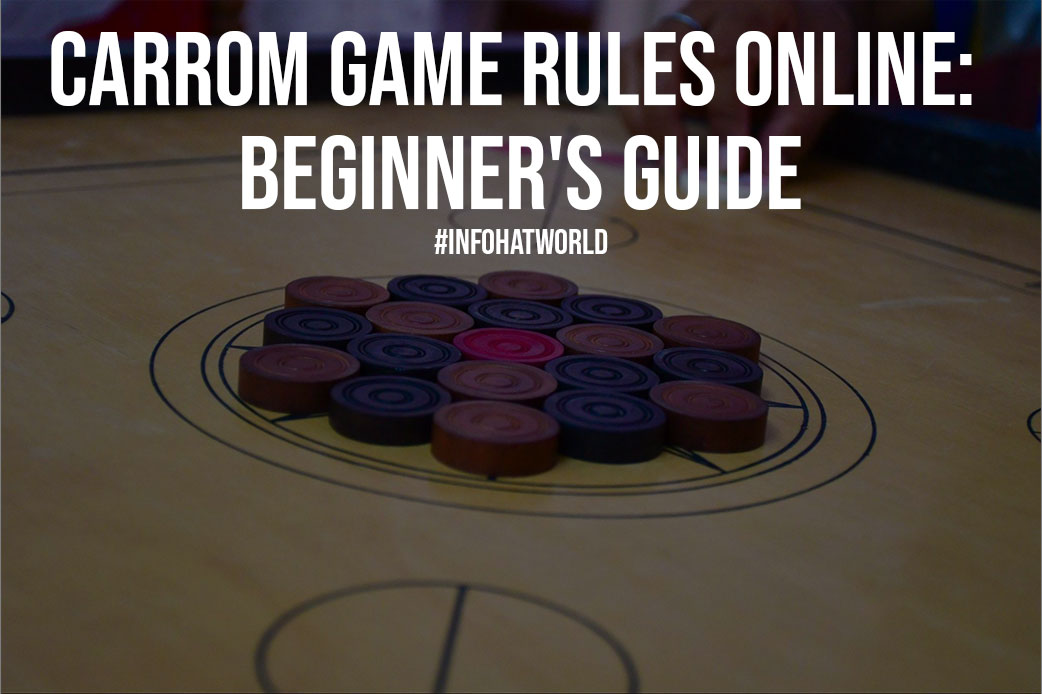 If you’ve never played the game before, here are the online carrom board rules you must keep in mind and additional information regarding the game. Then, with a bit of practice, you’ll play like a champ.

Parts of online carrom board

To play online carrom, you need your phone and Internet connection instead of the heavy carrom board. Apart from this, there are game pieces, a disc (striker), and the queen.

The game pieces are typically referred to as the carrom men, pucks, or carrom coins in carrom. They are small circular discs that are supposed to slide across the virtual board when struck by the striker.

You’ll have 18 game pieces divided into 9 black and 9 white pieces, and players choose the game pieces according to their preference. The nineteenth piece is the red piece.

The queen, as mentioned above, is a red game piece and the most valuable piece in the game, and it has the power to make you lose or win the game. The queen is the highest value piece on the board, and it can turn the game around.

Also Read: 5 Ways You Can Get Paid to Play Online Games

Online carrom is played between two players, and each player gets a turn to strike the game pieces (pawn pucks) with a disc. Players have to pocket their respective carrom men to win the game.

Each time you pocket an assigned coin, you’ll get another turn. You need to aim at pocketing as many coins as you can so you can win the game without letting your opponent play.

When you pocket the queen, you need to pot another coin to cover for the red piece. If you cannot cover the queen, it will be placed back on the board, and it’ll be open to being pocketed by your opponent.

Then, if your opponent pockets the queen and covers it, you’ll lose the game.

The moment you have potted the queen, you need to pocket one of your carrom coins, or the red piece will be returned to the center circle on the board.

When playing the game, you also need to keep in mind the fouls. A foul is considered when:

Whenever there is a foul, a potted coin is placed back on the board. It means you need to play carefully, so you don’t make a foul.

Otherwise, the coins you’ve pocketed will be placed on the board, and your opponent will have a clear advantage.

The highest point value is the queen or the red piece because it will provide you with fifty points. That’s why the red piece is the most crucial in the game, and it can become a turning point.

The break-in or the first move

In online carrom board games, the break-in is crucial. It is the first shot of the game, and in the beginning, the board is set such that all the pieces protect the queen.

Your main aim must be to disperse the game pieces, so they’re away from the queen and scattered around the board. Whichever player opts for the white game pieces will get the chance to strike first.

Your striker or disc must be flicked from the baseline, and it should touch both lines. However, the striker must not touch the diagonal lines on the board.

So, that’s everything you need to know to start your journey as an online carrom board player.

Play a few practice games to become well-versed with the controls, and you’ll be unstoppable. Best of luck with your next game!